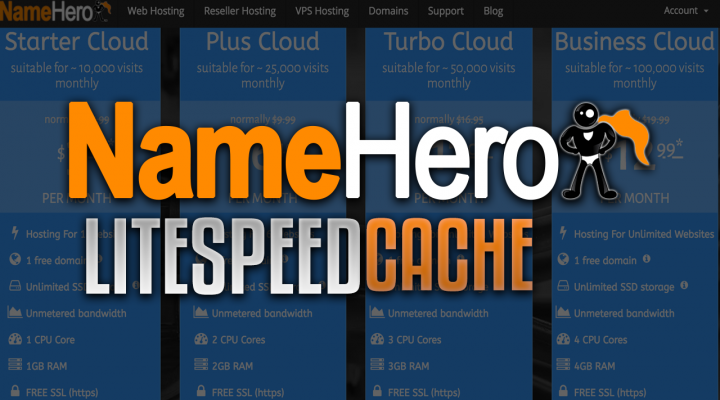 One of the biggest benefits of NameHero is the server-based caching. This is in-built into the hosting service with the LiteSpeed web server, and delivers dramatic performance gains if you have a relatively static site like most people. Keep in mind that this is superior to the normal caching plugins for platforms like WordPress such as W3 Total Cache etc, because this is implemented at the server level, and not by your website. This means it’s faster and less resource intensive.

But how does server caching work with LiteSpeed, and how do you enable it on your site?

All server caching implementations that I’ve seen so far – not just those on NameHero, require two components. One on the server itself, and one installed at the application level. The latter typically takes the form of a plugin that you install on the framework.

The idea behind the two-component framework, is that the application level component informs the server component about what to cache, what to purge etc. Since every application is different in terms of architecture, and how it optimizes and changes content, this component will vary from one software to the other. The server component however, remains the same throughout.

So download the plugin for your framework and install it. Here’s a tutorial on how to do that, as well as the features available.

Once you’re done with the first step, it’s time to enable the LiteSpeed cache in cPanel.

To make sure that LiteSpeed is working for your application, you need to log into your cPanel account in NameHero and scroll all the way down to “Advanced”. Here, you’ll see the icon for “LiteSpeed Web Cache Manager” as shown here:

Click this, and you’ll be taken to the next screen where you can configure LiteSpeed options. Scroll all the way down to the “LiteSpeed Cache Management” section till you find the cache for your particular software – in this example, WordPress:

Clicking on this will take you to the area where you can manage the LiteSpeed cache of all your installations for that particular software.

Scanning the Directories for Detection

For some reason or the other, the LiteSpeed plugin might not automatically detect the installations of the various applications. I initially thought it might be due to installing it manually instead of automatically using the tools in cPanel, but now I don’t think that’s the reason.

Whatever it is, the solution is simple. You can just as LiteSpeed to scan your folders for installations by clicking the “Scan” button as shown below:

This is relatively quick and will isolate the folders containing applications of the type that you clicked in the previous step. From here, you can enable or disable LiteSpeed cache by clicking the blue link on the right-hand side. Once done, the “Cache Status” column should reflect your choice.

Remember that once this is done, you don’t need to install any other caching plugins. In fact, I recommend that you actively get rid of them since they can end up harming your site with additional caching layers that do nothing, and only cause confusion when you try and clear your cache when something changes.

And that’s it! Now that we have both components of LiteSpeed up and running, your web pages will be served from the cache whenever possible, resulting in greater speeds, fewer resources, and a better experience for your customers all around!