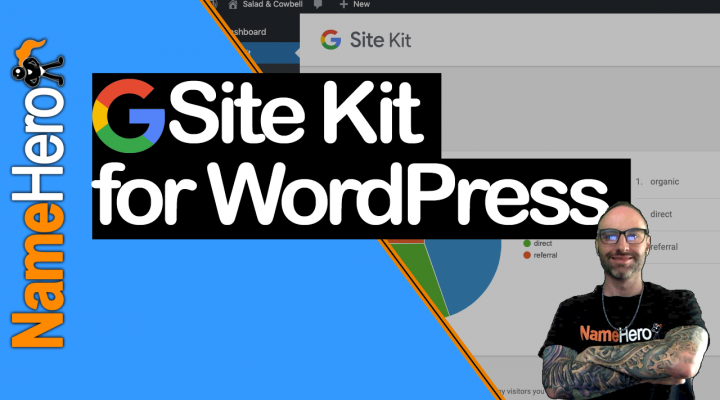 A little over a month ago on the 31st of October, Google released “Site Kit” for WordPress. It blends together all of Google’s tools like Analytics, Search Console, and PageSpeed insights, and presents their results together in the WordPress report screen. It’s a neat idea, and I can see where they’re going with it. WordPress is the most popular platform on the web, and by presenting all of Google’s tools in one easy package, they’re trying to create a solid foothold that provides great value.

However, after testing it out, I won’t be using Google’s Site Kit for WordPress, and I’ll give my reasons in this article.

But First – They Got Verification Right

To be honest, there is ONE killer reason to use Google’s Site Kit, and that is easy verification of your site property. As of now, if you want to sign up for Google Analytics, you need to prove that the site is yours either by adding some meta HTML code to your site, or by creating a special file with a unique filename that Analytics can use to verify your site. The same is true with Google’s search console.

But with Site Kit, all you need to do is install the plugin in WordPress, and all your verifications happen automatically. You just need to grant permissions to the plugin to access your various Google properties, and you’re done. You can connect to all of Google’s services with a few clicks and be up and ready in just a few minutes.

Honestly, even if Google didn’t allow you to see your site’s reports in one location, this by itself provides pretty good value. Weird right?

But the reasons why I won’t use Google’s Site Kit has more to do with my suspicious about Google software, built up over years and years. As well as my general philosophy about centralization that I’ll detail below.

Dislike the Additional Layer of Centralization

For a lot of people, being able to centralize their reports is a big benefit. They like going to one place to see everything. I can understand that, since I used to feel that way myself. These days however, I’m going in the opposite direction – decentralization.

The centralization offered by Site Kit requires additional work on the server at the backend, and though it might not be much, I like to keep my site as clean as possible. Additional plugins always come with a downside of possible slowdowns and bugs. So if the only benefit is centralization, it’s something I try and stay away from.

Moreover, Site Kit doesn’t make thematic sense to me. WordPress is a content creation platform. If I want to see reports, I’d like to use a separate application for that. I don’t want to mix up and burden one platform with the features of another. Admittedly, this is a question of personal preference. But I like to head off problems on my site before they become problems. I have no idea what kind of updates Google is going to make that can have a negative impact on my site – either deliberately or accidentally. And like I said, if the sole benefit is centralization, I can do without it.

I used to be a huge Google fanboy. I used all their cool free software, advocated for them, testing out their stuff…only to be disappointed over and over. Google sends products to the graveyard, or gives up on them completely, leaving them to rot. I’ve been burned by Google Reader, Google Health, Google Wave, endless messaging applications, Google+ – the list goes on and on.

At this point, I rely on Google only for those products that directly tie into its revenue – search, Gmail (with Gsuite etc), Analytics. Of everything else, I am deeply suspicious. I don’t trust Google to continue to maintain any piece of software for long. It’s simply not in their DNA. And Site Kit is sufficiently removed from Google’s revenue stream that I don’t have great hopes for its longevity.

A complex WordPress plugin requires considerable attentiveness. It needs to survive code rewrites, changing standards, bugfixes, and whatnot. I just don’t trust Google enough to be comfortable with installing their software on a mission-critical website, sorry!

The key benefit of Google’s Site Kit is centralization and easy verification. But for me personally, none of that is enough to overcome my inherent doubts about the impact and general unreliability of Google when it comes to 3rd party software.