Being a narrow-minded publisher is going to get you nowhere in the affiliate marketing space. You have to be able to “think above and beyond the norm” and tackle areas that are not near as saturated with brand advertisers and go after offers that the “average n00b” won’t. For whatever reason I notice that a TON of affiliates are not only timid but somewhat nervous to promote International offers. I’m not sure why, as most-countries have similar cultures as the United States. The US has really “set the standard” when it comes to innovation, advertising, and marketing so it’s likely what works in the US will work Internationally.

Now with all that said, I want to show you some interesting data with Facebook users: 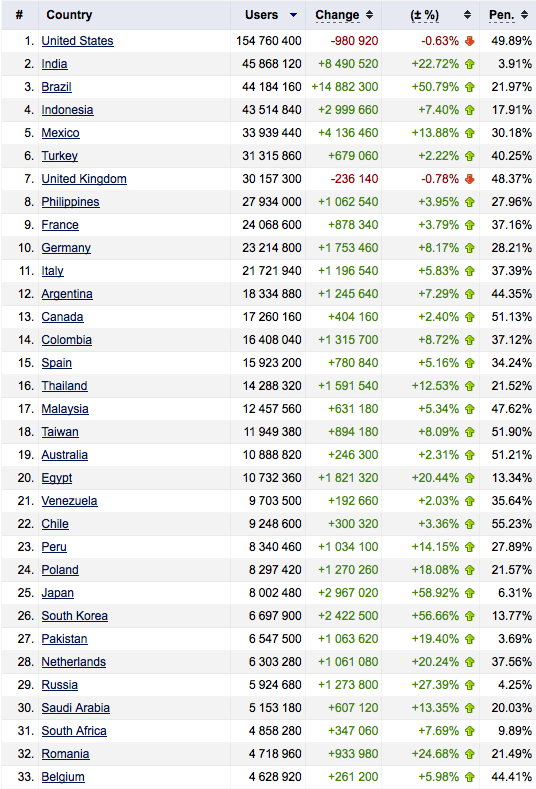 OK by looking at the top 10 most popular countries I want you to look how many Facebook campaigns you have live RIGHT NOW in India (hot as fire), Brazil, Indonesia, Mexico, Turkey, United Kingdom, Phillippines, France, and Germany. If you’re not hitting these countries hard I have to ask WHY NOT?!? According to this data, which was compiled by SocialBakers.com, India has the second amount of users right behind the US. Get on Wikipedia to learn more about their culture, get with your affiliate manager, and figure out some offers to monetize this MASSIVE user-base.

Just recently many publishers realized how lucrative the market is in India by direct-linking to Facebook Application Installs. Publishers were doing $X,XXX in this country alone (profit not revenue) DAILY!  Some still continue by expanding into their growing mobile market as well.

If you get nothing else out of this post, I want you to get this… THINK OUTSIDE OF THE UNITED STATES. I too have been a “hard headed” publisher, but once I started to branch out Internationally, I was able to watch my monthly profits nearly triple. You can also use this data to think outside the scope of Facebook. If these people are on Facebook, chances are, they’re on Google/MSN as well! So many options to monetize and in areas where the “brand advertisers” haven’t flooded the platforms with high click costs and competitive advertisements. #internationalwinning