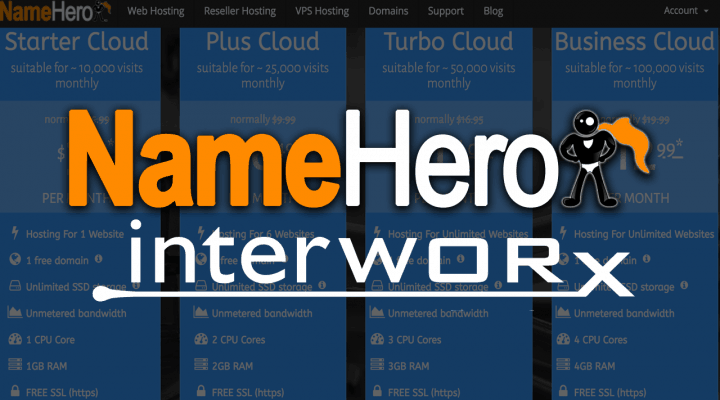 A new InterWorx version 7 is in the works and is about to be rolled out. While originally slated for release at the end of May 2020, it’s been pushed back a bit. So consider this an early bird preview!

Last year, NameHero announced that it was offering support for InterWorx on all its VPS plans. This was because cPanel had just finished adding onerous price increases to its licensing scheme that threatened to put many small resellers out of business. For users just getting used to the new interface, we had written a series of tutorials on various of hardening an InterWorx server such as disabling root access and more.

As mentioned in an earlier post, the reason why NameHero is going with InterWorx as a preferred alternative to NameHero is their development process and the development team. The changes at cPanel have further galvanized them to improve their product – starting with the interface.

Here’s what the old interface used to look like:

While functional, it certainly looks a bit dated. For one, the design isn’t “flat” – there are still remnants of the older design philosophy where developers used shades to convey depth. The trend towards flat design has prompted the InterWorx team to also adopt the new layout pattern.

One of the key goals of the rework is to emphasize the difference between SiteWorx and NodeWorx. These two products complement each other like WHM and cPanel. Previously, the look and feel for the two were similar. With the new design, the InterWorx team has added a light background as shown here:

For SiteWorx, the dev team has tried to place most of the functionality right on the home page. Previously, much of it was accessible only from the sidebar menu. Those who are used to the sidebar still have access to it via the strip of icons on the left hand side.

By contrast, the NodeWorx interface is now clearly distinguished by a darker color theme:

As you can see, the functionality is left untouched, but it now looks much cleaner. You can still enable or disable the services running on the server in one click, but it’s much flatter and more modern looking.

A New Focus on Responsiveness

One of the goals of the InterWorx design team, was to make the panel more accessible on screens of all sizes. As a result, the new interface is perfectly responsive, and reflows seamlessly as shown here:

With these changes, InterWorx as a whole is a lot more attractive, and a far stronger competitor to cPanel. Functionality aside, the interface is a great enabler, allowing users to complete key tasks more easily.

If you’ve gotten a chance to use the new InterWorx 7 interface, let us know what you think in the comments!