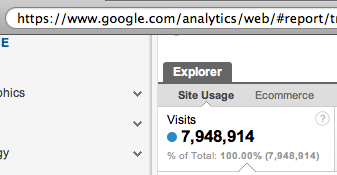 Notice that little survey box that pops up on our blog here at IMGrind.com?  We simply ask visitors what they want us to write about.  One of the single biggest things (besides reminding Ruck to not cuss-ha) is how much money do you have to spend to become profitable.  I know I’ve touched on this topic before but today I want to show you all some of my numbers.  Last year one of my websites got 7,948,914 unique visitors and I didn’t pay for a single one of them.  I sure as heck monetized them though!

Too many people are reading into the bs that you have to spend a crap load of money “testing” a campaign or website before it makes money.  This is not true.  I’ve said over and over I’ve started some of my most long term websites with little to no capital. I honestly believe some people don’t like this avenue because it takes more time.  Far to often I hear how people want to first make some “start-up” cash and then focus on going “long-term.”  Why not start your organic traffic first and then combine it with paid traffic once that starts converting?  It doesn’t make sense to go spend a bunch of money anyways if the page doesn’t convert.

I consider social media the “new” SEO.  Your website should contain a blog.  The only thing that separates your website from the competition is your voice – the power of words.  Even some of the silliest niches can have an entertaining blog.  In my opinion though the blog sets the stand for a strong social media presence.  If you type interesting material people want to share your content with their friends.  All a visitor has to do is “Like” or “Tweet” your link for it to gain exposure.  Once a couple people start the trend, it doesn’t take long to really start knocking some some solid numbers.

Back to the 7,948,914 visitors…  Where did they all come from?  Google, Yahoo, Facebook, Twitter, Bing, etc. – not in that particular order.  I’m a huge fan of WordPress.  With a couple of clicks and some time it’s very easy to have a SEO optimized site that search engines can crawl easily.  Simply setup those basics in the beginning then syndicate your content through social media platforms.  As people begin to share they’ll also link out to your site increasing your SERPS.

Back in the early 2000s I simply relied on links from other websites and type-in traffic.  As Google grew I began to rank with ringtone sites.  Now, with the social media craze, it’s pretty easy to get your content in front of people’s eyes instantly (especially if you have a lot of Facebook friends).  Start thinking long term from the beginning, blog, and expand organically with social media.  The SEO and visitors will follow!