Jumping into mobile marketing can be a daunting task for many.  New advertisers will find loads of traffic but very few of them actually stick around to experience the ROI.  I got my start running mobile traffic back in 2009.  During this time it was about damn near impossible to find a mobile formatted CPA offer.  Some advertisers tried it for a bit, but never really followed up.  There were a couple of quiz based/ringtone offers that converted good but that was extremely limited.

Today, we’re seeing a lot more advertisers take a huge presence in in the mobile industry.  From dating websites to daily deal and shopping services, there are many offers to choose from in various markets all over the world.  As the competition increases good ole economics starts to set it with supply and demand.  The more demand, the more an advertising network can set their minimum bids making it damn near impossible for some people to break in.

Mobile traffic is growing rapidly, so there is no loss for volume.  New advertising networks are popping up daily offering various types of creative units and means to deliver your advertisement.  While this all seems fine and dandy one thing many are not talking about and that’s how to make the return on investment be worth it with mobile traffic.

Over the last six months Ruck and I have been running numerous mobile campaigns and have constantly been studying areas that allow room for optimization.  While the standard ad creative/landing page split tests get most campaigns profitable, tapping into the device manufacture, carrier, and handset device have allowed to to EXPLODE our ROI.  To help us capture this data we joined up with mobile-marketing veteran Bill Bradow.  Through our combined efforts we were able to greatly increase our mobile campaign ROIs and scale to new levels.  Don’t take my word for it though; look at this screenshot from one campaign: 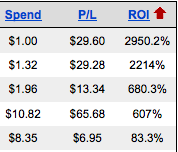 The Spend column is how much we spent, the P/L column is how much PROFIT (not revenue), and the ROI is show via percentage.  Adding those numbers up, that’s a whopping $23.45 spent for $144.85 PROFIT.  Pretty freaking incredible huh?

Understand that the winning combination of a couple of different factors including creative, landing page, offer, carrier, handset type, and handset manufacture can return a massive ROI.  Sure, on this campaign there isn’t a lot of daily volume, but the ROI makes it all worth it.  Simply duplicate campaigns like this across multiple ad networks and really feel the increase in your bottom line.

Now I’ll admit, campaigns such as the one above don’t always happen.  However there are some sources out there where you can sacrifice some of the ROI and take the volume in return.  Basically this all boils down to personal preference and what your risk-ability is.  Here’s another peak:

Both of these campaigns were losers to begin with, but ended up being big-time winners.  The point I want to get across in this post is that successful mobile marketers will completely dissect the traffic and find exactly where the sweet spot is.  You’re limited just split testing creatives, landing pages, and offers – take your campaigns to the next level by discovering what carriers, hand-sets, and other metrics are converting then scale accordingly!