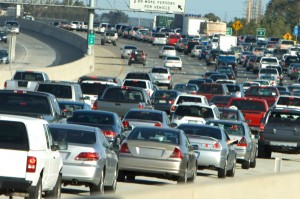 Nine out of ten new affiliate marketers want to purchase their traffic at an ad network or other traffic source because they don’t have the patience for SEO, social media, or other means of organic traffic.  They’re looking for that “quick” burst of traffic so they can begin generating a lot of revenue quickly. In a way I don’t blame them, it’s very possible, but too often new affiliates go in unprepared.  Just because you’re buying traffic and are getting instant visitors to the offers you’re promoting doesn’t mean instant success.  While rags from riches stories are good to read, they don’t come without a lot of hard work and dedication.  Before getting started buying traffic it’s important to set obtainable goals, understand the user interface from your traffic source, having plenty of banners/creatives, tracking closely, and knowing when to scale up.

Setting goals is so important in business.  Most Entrepreneurs that I know suffer from some form of ADD (or what we call shiny object syndrome).  They’re so full of “good ideas” it’s hard to just stick with one and go with it.  They want to start one, start another, think about one more, and before long they have so many things going on nothing is successful.  By setting goals it’s easier to keep track of everything and plan a course of action.  Before buying your first click you may have a goal to break even within the first days.  You may set a goal to be profitable in  your first week.  Heck, your first goal could just be getting your first campaign setup!  While it may seem a bit silly, this is a very important part of the traffic-buying process.  Your goals need to be obtainable (ie. reasonable) and should be written down or printed out where they can be seen daily.  Remember to reward yourself when you reach a goal.  This doesn’t have to be that new Ferrari but a reward as simple as going out to see a movie or taking a day off to the beach.

One of my biggest downfalls since I can remember is I hate to read directions.  I can remember growing up and getting a new toy.  I didn’t want to reach the directions on how to put it together I wanted to just “figure it out.”  Ever since Ruck and I joined forces he’s very methodical getting to know every piece of software, ad interface, or online tool we use inside and out.  He starts by reading through all of the help documentation even printing some out and going through with a highlighter.  This is something I’ve adapted too and it’s saved me a shitload of time guessing how to do something.  Some platforms such as Google Adwords make so many changes it’s essential to go through their documents and read what the system is capable of.  I’m shocked at the number of affiliates I talk to (some very successful) that don’t know some of the most basic features of a traffic source.  Before purchasing your first click of traffic, get to know the traffic source’s interface!

This past January Ruck and I held a Grind Session in Las Vegas.  During the event we asked attendees, “what is the purpose of an ad server?”  A couple of good answers mumbled throughout the room but no one said the most obvious one: to serve ads!  Ad servers have the most simple task of serving ads.  They’ve been designed to lump banner and text creatives together and distribute them through impressions based on eCPM.  Understanding this is important because when you’re buying traffic you want to have the best eCPM and you want to get your banners in front of eyeballs so they will click on them!  I get really annoyed when a struggling affiliate asks me “what they’re doing wrong” and they’re only using 2 or 3 banners in their campaign.  That is not enough!  Yes, it can be a bit time consuming making banners and uploading each one of them, but if you’re going to purchase traffic, you better get used to it!  As a benchmark I like to say at least 10 – 20 creatives per ad group with at least 10 ad groups per campaign.  Stack it full and see how the ad server responds.

If you’re going to be working on a performance basis then tracking is a must.  Some affiliates want to “direct link to get started” and will then “setup tracking when they make some money.”  No!  This is wrong!  You need to track your campaigns from day one!  Even if you are direct linking you need to know important information such as day/week parting and if advertising on mobile traffic you need to understand what type of devices are sending you traffic.  Screen size is everything!  Our team developed the iMobiTrax platform to track mobile, social, PPC, CPV, and other performance based campaigns.  If you don’t want to invest in that, at least have some means of tracking your campaigns from the very beginning.  If you’re going to spend money on traffic tracking is an absolute must!

It’s important to know when to scale up or when to move to another source of traffic.  This goes back to our initial goals.  One thing a lot of beginning affiliates do is jump from source to source with $50.  They’re hoping the more stuff they throw at the wall the more stuff that’s going to stick.  This may work 1% of the time but it’s one of the most frustrating ways to approach affiliate marketing.  You need to have patience and isolate your initial budget to one traffic source.  Once you get something going, work with it until you get it profitable.  If your first test tanks, examine the data and see what you can do better.  Don’t count the traffic source out until you’ve logically considered every step of the campaign.  If you’re accurately tracking then it’s likely you’ll be able to see the traffic come in and how it responds to your offer (ie. CTR through LP).  Before scaling out to another source of traffic get your first one profitable.

As I noted above, purchasing traffic is what most affiliates prefer because of instant gratification.  This should not be substituted for instant success.  Buying traffic can be very rewarding but it can also be very frustrating if you don’t follow a plan of action and understand how the process works. Take it one day at a time, step by step.  Have your goals where you can see them daily and make sure you meet them.  Don’t get scatter brained stay on your path and you will find success!