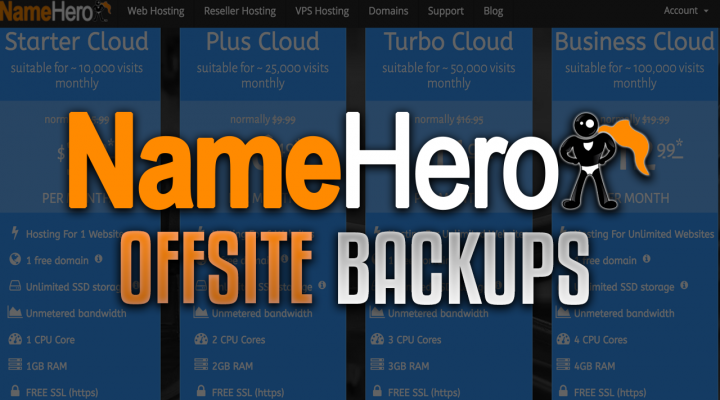 Lately I’ve been writing a lot about backups – particularly offsite copies that are separate from your hosting, and don’t live on the same network. The reason for this is pretty clear. No matter how experienced, how secure your web hosting’s infrastructure is, there’s always a chance that they will be systematically compromised – and that includes your backups as well.

This isn’t a mere theoretical possibility. In mid-2019, A2 Hosting suffered a massive malware breach that ran its course over two separate months, and ended up compromising not just their servers, but all of their customers’ backups too. In some cases, website owners lost months of data. Yikes! So keeping all that in mind, I recently write a two part series on offsite backups, and the different ways you can keep your data offsite.

NameHero Backups Already Do This

However, did you know that NameHero already maintains its backups offsite? Lots of web hosts take regular backups of your site. Some of them even store them for a long time and allow you to restore to any point in the last month or so. But to my knowledge, none of them keeps these backups in a separate offsite location on a separate network. If they do, they don’t advertise it.

Neither does NameHero. This is something that we should definitely talk about more, since it’s a tremendous value add, and can save you a few bucks if you think that having two offsite backups is taking security a bit too far 🙂

NameHero takes two separate backups of your site automatically – nightly and weekly. This is in addition to the “snapshot” functionality where you can take a backup of your site at any point of time and restore it from there. All this is thanks to the Jetbackup cPanel plugin.

But what most people don’t know is that the nightly and weekly backups are stored on separate servers! This additional wrinkle ensures that in the worst-case scenario if the backups themselves are corrupted, users will have access to another version of their site. It’s taking security to the next level. It also goes without saying that all of your backups are encrypted.

An interesting tidbit is that because NameHero uses offsite backups, they needn’t be quite as conservative with storage space since it’s not being kept on the same server. This means that they are able to make incremental backups each time since the files are not compressed.

Other web hosts find it cheaper to store all the backups on the server itself. Now since this means that storage space is limited, they have to compress all the files and in doing so, lose the capability to perform incremental backups since the data is all mushed together instead of separated out on a file level. Compression is an extremely CPU intensive task, and this slows down the server considerably – it’s one of the reasons why I didn’t want to use plugins like UpdraftPlus in the first place.

So NameHero’s backup system is easy on the server, and this means that your site won’t be impacted during this time. The entire process happens smoothly with no noticeable slowdown on website performance.

NameHero’s obsession with redundancy, causes us to keep offsite backups of our customers’ data, even though we already offer integration with DropMySite. This ensures that in the worst-case scenario, we’ll still be able to recover our customers’ websites and that any disruption to the service will be local and won’t spread to the backups themselves.