Something I discuss in detail in our Community is leveraging paid traffic with trending topics. Since pay-per-click platforms such as Google Adwords and Microsoft adCenter allow advertisers to bid on keywords to reach content placements, given the right topic, you’re able to get a ton of volume dirt cheap.

A few years ago when Brett Favre said he was going to retire and leave the Green Bay Packers I started bidding on every “Brett Favre” term I could think of. I created ads that said: “Should Brett Favre Retire – Yes or No Answer Our Poll” and then sent visitors to a landing page where they clicked “Yes” or “No” and were directed to an email or zip submit offer. I was spending $400 – $500 a day getting $0.07 clicks. I scaled it out to other verticals until I was making around $20,000 a month (profit) just from these simple surveys. Had I really been thinking I would have collected email addresses and arbitraged them to even more CPA offers (probably would have quadrupled my profits).

Recently I was reading a blog post on Compete.com where they discussed the Casey Anthony trial and the impact it had on CNN.com’s traffic. Take a look as this graph that they compare to Osama bin Laden’s death (another trending topic): 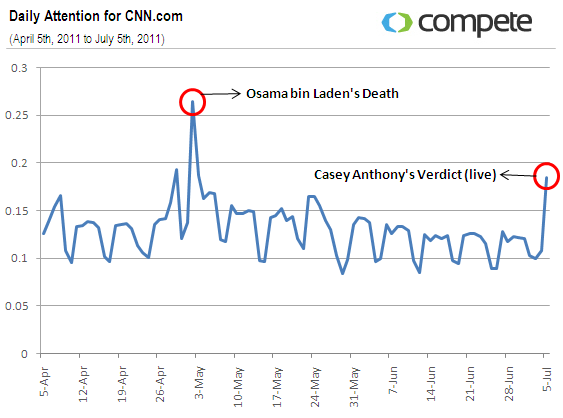 Through the duration of that trial (or even Osama’s death) you could have gotten creative, created a quality, compliant landing page and driven thousands of visitors through a conversion funnel. High quality websites like CNN.com contain traffic that yields excellent conversion rates (ask some of the Acai guys about their profits when they were on there). Given the cheap clicks your front-end wouldn’t even have to be that aggressive and you could still be mailing them to this day offers across multiple verticals.

I’ve even bidded on terms such as “groceries” and pushed a zip submits for a solid $2,000 a day profit around election time using similar methods. The possibilities are literally endless!

Ruck made a post on his company blog recently about TrendsBuzz.com, a site that aggregates trends Google, Yahoo, Twitter, etc. so you can easily see what topics are hot and where you should be concentrating (I can spot about 5-10 different opportunities right now). This is yet another example of how creativity in the Internet Marketing industry opens up many opportunities to cash in on and monetize traffic.

How creative are you with your campaigns? Are you thinking above and beyond or are you stuck in the same old rut that is filled with crappy ROIs and tons of competition? I’ve shared some of my numbers with you, so I can promise it works very well.