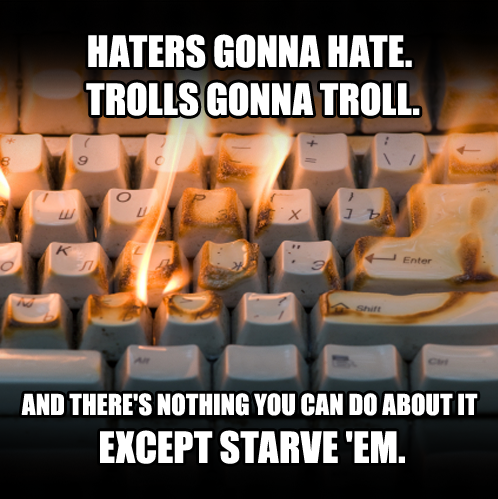 Most of us are familiar with the saying, “haters are going to hate.”  But one thing a lot of people don’t talk about is how to handle when everyone wants to see you fail.  Rumors, gossip, and hearsay can be a bitch especially when it comes from those close to you.  Over the last several months both Ruck and I have posted blog posts on how the fear of loss is much greater than the hope of gain.

Through social media and other mass mediums our culture has become very materialistic.  Often times those that have succeeded in business are viewed “better than” someone who is making an “average” living. Let’s take a look at reality television for a moment.  How many shows are on the cable networks now days where individuals are made famous simply because the way they act on television.  Living in their big mansions, driving their luxury cars, with their biggest problem of the day being who said what while drinking bottles of liquor at the club.  I personally feel that some of this is getting ridiculous!  Seriously what is wrong with people?!

Working online I’ve had the privilege of seeing some individuals find success in a very short period of time.  It’s not that working online is easy but it’s scalable because you’re not surrounded by four walls and limited to local business.  Depending on your product or service you can have customers around the globe. Look at the powerhouses: Google, Facebook, Amazon, etc.  They all have visitors around the globe clicking ads and interacting on their properties.  Mark Zuckerberg had a great idea but he was able to scale so big because his service reached a global audience and with the Internet he had no boundaries. The same goes with many online businesses.  If the product or service is useful and doesn’t suck then it has the potential to reach great revenues sometimes even hitting a “snowball” effect.

Unfortunately success also brings along jealousy and envy.  Using affiliate marketing as an example, how fun is it to see the person you sat beside in college get out and scale their business to millions of dollars a year while you’re still working for “the man” making the modest $60,000 a year?  This irks some people because they wonder “why not them.”  Sometimes this makes them jealous or very envious.  To your face they’re nice to you and praise you for your success but secretly they lie awake at night just waiting for the second you fail.  They may even give it a shot themselves to see if they can’t achieve your level of success but quickly get frustrated and give up when they don’t see results.

A lot of affiliates remember the “rebill days” in 2008 – 2009.  People that had never made a dollar before online quickly scaled to hundreds of thousands of dollars a month.  Profits were very large and quickly lifestyles changed.  Some took this opportunity to invest in other projects and quickly diversify creating very long term business models.  Others spent the money as quick as it came in.  Stemming from a number of changes in the industry unfortunately those that didn’t diversify their businesses and had their eggs all in one basket were found going back out and getting a 9-5 job or latching on to whatever they can to try and avoid having to go “back to work.”  How satisfied to you think many of the haters out there are when they see something like this?  They’re going to be quick to troll you anyway they can because they feel a sense of gratitude.

Starting your own business is very challenging.  It can take a toll on your mentally and physically because the hours are never set in stone.  You’re going to have to get up early and stay up late.  While everyone is out on the weekends you’re going to be stuck in dealing with the growing pains especially when you really start to gain leverage.  With all of this going against you it can be very challenging if you don’t have the support of everyone around you.  Rather it be your spouse, your family, or your best friend it’s important to develop a support, but if that’s not possible then you need to be able to block what others say, keep your head up, and focus on the big picture.

Those of you out there reading this that are thinking about starting your own business I want to provide you with a bit of encouragement.  You cannot control actions of those around you but you can control your actions.  Keep focused on your goal and work as hard as possible.  In my experience of working online for the last 15 years, I’ve never included “can’t” in my vocabulary.  I always say “how can I.”  Those that doubt me are just background noise.  I don’t let them get to me and I continue doing what I love everyday.  Those of you out there reading this that are already successful growing your business, congratulations!  Let those that doubt you continue to talk while you remain focused on growing your future and career!