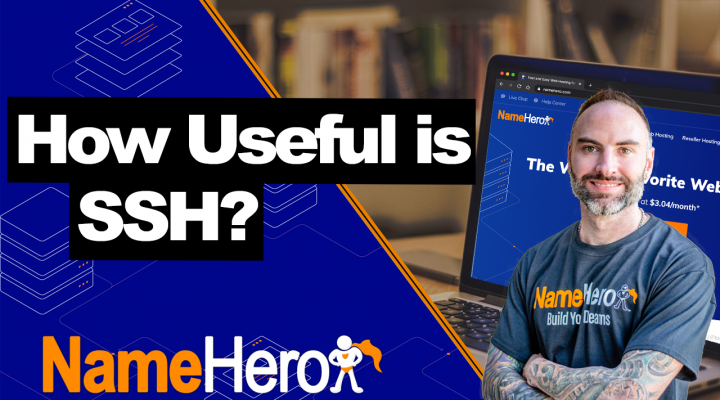 NameHero offers jailed SSH on its shared hosting plans. This means that you can use SSH on your site to issue commands, make connections from external services, and more. But how useful is it really? Is it for everyone, or merely for a few technically advanced individuals with specialized requirements?

What is Jailed SSH for Shared Hosting?

SSH is a protocol to establish a secure connection between a 3rd party computer and the server that holds your website. It’s a useful tool because the connection is encrypted – meaning that no one can listen in on the communication. Authentication can happen using either a password, or a secure key stored as a file. The latter is considered to be more secure than the former.

In the context of shared hosting, NameHero provides SSH that is “jailed”. This means that you have access only to the folders and files that belong to you, and that are not crucial for the functioning of the server. This is a good thing. Shared hosting means that there are lots of other people on the same server (virtual or otherwise) as you. Without jailed SSH, anyone would be able to make changes to anyone else’s accounts and files! That would be a disaster. Hence the jailing.

Because SSH is a vector into your server, NameHero insists that you request SSH access by opening a support ticket. Most people don’t use SSH. And there are many attacks on servers that focus on trying to exploit SSH access, by scanning the ports and trying all kinds of usernames and password combinations. Because of this, SSH is shut out by default for all shared hosting customers. If you want it, it’s just one support request away.

SFTP – The “Killer” SSH Use Case for Shared Hosting

If I had to designate just one application for SSH that everyone should use, it would be SFTP. I’d recently written an article on why you should never use FTP, and how the best alternative was SFTP. It’s basically FTP with an encrypted connection. And you need to enable SSH for that to happen. Without SSH or SFTP, I’d have no choice but to log into my hosting backend and fire up the file manager each time I wanted to modify files. And while I can do that, it’s a more laborious process, and doesn’t have many of the benefits that a dedicated SFTP client brings.

So my recommendation for SSH is that it’s necessary for SFTP. You don’t really need another reason.

While SFTP is a good enough reason to request SSH access from NameHero, you can also use it for giving access to 3rd party backup services so that they don’t have to use plain text FTP when they take backups of your site. For example, DropMySite has direct integration with NameHero, and is a super cool service that I feel a lot more people should be using. It’s far more cost-effective than other backup solutions.

In the DropMySite configuration screen, you can use SSH to allow DropMySite to take secure backups of your site. The other option is FTP, which as I’ve already stated, is a bad idea.

Other Uses for SSH

In the past, I’ve also used SSH for some quick scripting work, but these are specialized. Sufficient to say that SSH is an extremely flexible tool with a variety of uses. However, its backed capabilities are far more necessary on a VPS than shared hosting. Which is why the above two use case scenarios should be a good enough reason for your to strongly consider SSH access for shared hosting on NameHero.