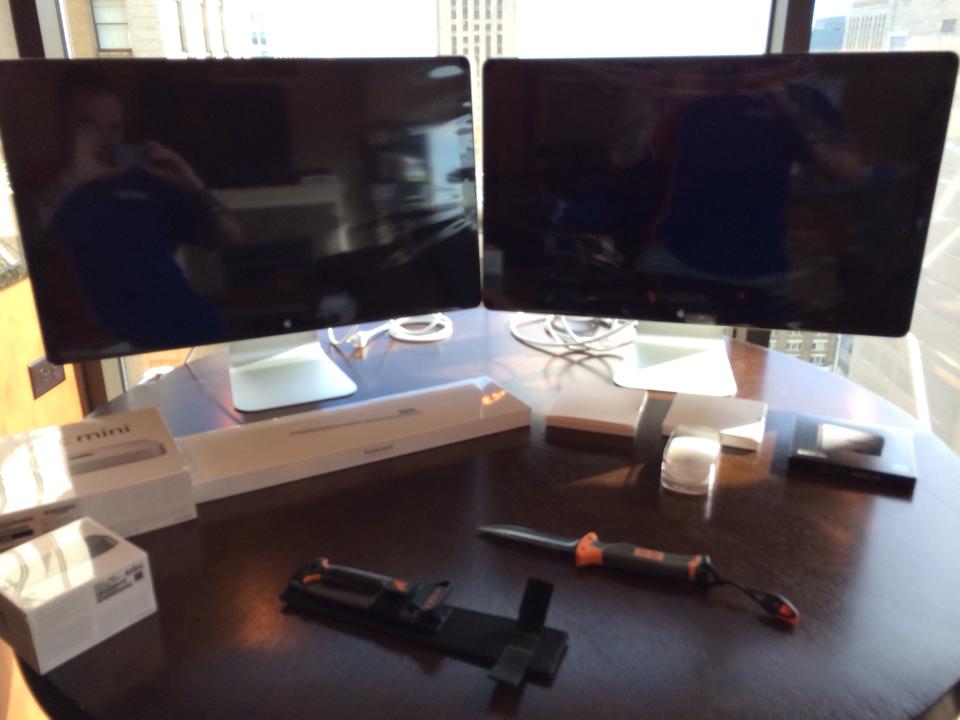 As we’re getting ready to move into our new office in Kansas City, Missouri I decided to part ways with my MacBook Pro and go with a real system.  Given my travel history over the last couple of years, I’ve rarely stayed in one place long enough to have a central machine.  Since that’s changing I made some pretty nice upgrades.  Little did I know how much this would increase my productivity…

Anyone thinking about starting a career working online or those currently accomplishing that all have one thing in common.  They’re using a computer or device to access the Internet.  I often feel like this is easy to skip over but essentially one of the most important things we should have consider.  I’m guilty red handed of not keeping up with mine.  The week before i upgraded I decided to re-visit the machines I’ve used since 1998 to build multiple multi-million dollar companies:

* 1998 – New Gateway PC out of the box with all the perks.  Started with the good old 56K modem, eventually moved to cable in 2002.  At the time I thought I had everything…  This is THE machine I taught myself HTML, Perl, PHP, linux server management, Photoshop and other essentials that were needed at the time to have a badass site.  Nowadays I dread even having to boot it up, but it still runs and I have all my original work saved!

* 2002 – Before going off to college at the University of Kentucky,  I purchased a Dell laptop through them at a great price.  It was a tremendous update from my old Gateway and could run everything.  Not too sure the exact specifics but it lasted until 2007.

* 2007 – After graduating college and moving into my first office I purchased a new Dell laptop and PC.  That way I could travel and still have a central unit at the office.  My old laptop from 2002 was severely outdated.

* 2009 – Once you go Mac you never go back.  After watching my business partner check our affiliate revenue from the airport (going to ASE 09) in record-breaking speed, I decided it was time to get a real machine.  Ever since then I’ve been able to greatly speed up productivity because of the way their operating system runs.

* 2011 – When I moved into our first office in Kansas City I figured it was time to upgrade again to the MacBook Pro with the big 17″ screen. Knowing I was going to travel a lot, I wanted to have a system loaded with memory and RAM that could handle anything.  I actually plugged it into an external monitor in the office as well as a mouse and keyboard.  This was an EXCELLENT solution for having everything when you travel, but it does get heavy to carry around.

* 2013 – I decided it was time for a real system.  Using a MacMini I now have 16GB of RAM, 2 – 500GB SSD, and 2 – 27″ Thunderbolt displays.  Holy crap what I’ve been missing!  I’m able to streamline a lot of my daily tasks by working more efficiently.  Finally, I no longer fear opening Photoshop while Skype and Dreamweaver is up!

While doing this upgrade something dawned on me…  All the money of the years I’ve made online and all the money I’ve spent on countless materialistic bullshit, how many upgrades could I have done?

If I evaluate where I spend the majority of my time; it’s spent behind a computer.  Not driving a new car.  Or out sporing the newest wardrobe.  So why am I not spending my money wisely and doing efficient upgrades?

My latest upgrade has definitely helped my businesses and I’m going to make a point to upgrade each year.  Having a workspace that is redundant and high performing is a must for those that want to make a career working online.  If I would have done things the “right way” the “first time” I would have saved myself a lot of time and headaches.  I also upgraded to the new iPhone 5S while I was doing all this and it’s sick!

What kind of system do you use? How often do you perform upgrades?