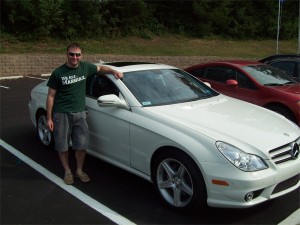 One of the things Entrepreneurs rarely discuss is the “behind the scenes” details that many are unaware of. Ruck has taken the initiative to discuss how he recovered from a bad relationship as well as overcoming an obsession with money to get back on top. The thing about us here at IMGrind is we talk about the good, the bad, and the ugly. We don’t like to hold anything back because your personal life has a direct effect on your business. We always say around the office, “how you act in life is how you act in business.” This is something I’ve noticed over the last 14 years working online and it still holds true today. Many people don’t discuss this stuff, but it’s essential to anyone wanting to become their “own boss” to hear.

The year was 2007 and I had just graduated business school at West Virginia University and moved into my office where I would pursue my online ventures full-time. I started to make money online in 1998 but given the “dot com crash” in 2000 I decided to complete my education as a “backup plan” incase the worst would happen again (I lost several hundred-thousand dollars due to this event). The day after graduating college I moved back to my hometown of Beckley, West Virginia and at 8:00 a.m. ET reported to the office. After a brief introduction to the secretary we hired, my identical twin brother and I were off to accomplish our goals we had been working on for many years.

To the “outside world” things appeared excellent. Two young guys in an office with a secretary pursing their dreams of owning and operating their own business fresh out of college. While this was true there was a whole new level of responsibility. Each day at midnight the stats start at $0.00. In order to live we had to make a certain amount; any loss was unacceptable and being right out of college, an abundance of bills met us (cost of living, health insurance, car insurance, etc.). It was time to grind and make big things happen.

A couple of months in we found ourselves with three different companies under one umbrella: WrestlingNewsWorld.com (a large hub for pro wrestling fans), TheHostRack.com (a global web hosting company), and Gray Marketing (a performance based online marketing company). The money seemed to grow exponentially as we continued to work day and night to make big things happen. Often at times I would feel overwhelmed and found myself staying up all the night only to get back in the office by 8 a.m. I loved what I did but I also worried like hell about something going wrong. In college messing up was OK. I was a student and if I made $1,000 a day I was far ahead of my other peers. However in the “real world” I HAD to make at certain amount consistently to ensure I had a place to live and money to pay my bills; my worst fear was having to get a “real job” I didn’t want to have to work for “the man.”

After the first couple of months all hell broke lose. Business was great but I found myself unable to sleep, unable to do anything else but work, and I began to suffer in the gym (a hobby I started back in college), and became miserable overall. I felt so bad I thought I was literately dying. Worrying about my own well-being I went to see my family doctor where I discussed with him my ventures and what exactly was going on. He suggested that I try the anti-anxiety medication Paxil; 10MG a day. At the time I was so desperate I didn’t hesitate and accepted his perscription without second guessing. After the first three weeks I felt like I had been prescribed a “miracle drug.” All my problems ceased and I was once again able to sleep, relax, and not worry 24/7 about business.

Things were going great as in 2009 I finally hit a huge milestone in my career making over half a million dollars in one month. I thought I was unstoppable. I had a very nice home, I drove a $70,000 Mercedes Benz (paid for in cash brand new), and business was better than ever. One thing was missing… I was numb. While it’s hard to describe in text I wasn’t myself. Sure, I was able to sleep and conduct business on a daily basis but I began to neglect things that were once very important to me. My relationship of over six years was suffering, I was doing anything and everything to make that extra dollar, and the only thing I cared about was going to sleep with over $10K a day profit in my wallet. At the time I thought this was what being a “businessman” was all about, but I was sadly mistaken.

In late 2010 I was approach by Ruck to work with him on a couple of projects. He owned one of the top CPA networks in the industry and we collaborated on many new projects that would be mutually beneficial. After a lot of thought and consideration I accepted his opportunity. Initially I started working remotely from West Virginia. After a couple of months I decided that I needed to move from my small hometown to his corporate office in order to be able to grow and fully accomplish our goals.

By May 2011 I relocated to Windermere, Florida. I had a very nice home with all the perks: four bedrooms, a guest house, swimming pool, gated community, etc. Everything was great except I was still taking that medication I was prescribed four years ago. The years had passed very quickly and I was still numb to the world. My business performance was excellent but I lacked many things personally. I was very selfish and only cared about the all mighty dollar. Profits were through the roof, I was making more money than I could spend, but I was neglecting many things important too me. On the dark side, I was abusing substances and didn’t care about anyone but myself. It was all about me and I was winning…

In the summer of 2011 Ruck and I created this website, IMGrind.com. Our goal was to create a LEGITIMATE coaching and mentoring program for Affiliate/Internet Marketers. We wanted to create a place where people of ALL experience levels could unite and work one-on-one to develop long-term online businesses. While words cannot describe, it was at this time something “clicked” in my head and I made some decisions that would change my life forever.

Fast forward to last January 2012… I checked myself into a diagnosis health clinic for business executives to undergo a battery of tests taking a proactive approach to my long-term health. At the time I discussed with my new physician my Paxil usage and he suggested upping the dosage to 20MG. While I’m not a Medical Doctor, I did conclude that since I had been on the 10MG for so long my body had adapted too it and in order to sustain the same effect my dosage needed to be doubled. Doing exactly as instructed, I began taking two pills a day rather than one. When my perscription ran out I began taking the 20MG tablets. Unfortunately this was a huge mistake.

By February the side effects came on heavy. Not only was I “numb to the world” but I began to suffer other side effects that effected my new relationships. It was at this time I decided to quit medication all together and tackle the world “head on.” Regardless of every warning I read, I threw the pills in the trash can and haven’t looked back since. Since doing this I’ve became a completely different person.

For the first few weeks I suffered withdrawal effects much like a heavy drug user. I was dizzy in the mornings, I couldn’t sleep well, and I fought terrible night terrors when I did sleep. However I was determined and wouldn’t allow myself to get back on the medication. It was pure hell but I would not give in.

Here I sit ten months later. I haven’t taken Paxil since and now we not only own IMGrind.com but also have RevivedMedia.net (a mobile digital advertising agency), iMobiTrax.com (propriety mobile tracking software), and MobGrind.com (a mobile traffic resource hub). Off the medication I’m back to my “normal self.” Sure I’ve had to learn how to “relax” but after everything, I find it easy. It’s very important to find a balance between work and personal time and utilizing organization to make the most out of the work day. While you may find some “instant relief” with prescriptions it’s very important to remember that you can make it without. I’m not a doctor or a biologist so I’m not going to make narrow-minded assumptions on what I think is wrong with big pharma.

In conclusion, I bounced back after several years under perscription medication. 2012 has been my best year ever and things will only continue to improve. I’m no longer “numb” and am operating more efficiently than I ever have before. Each day I wake-up an do what I LOVE not for the money but because of the passion. Having our Private Community, hosting our live events, working with Revived Media, and developing iMobiTrax are things I enjoy and the money happens to be a bonus. Thank you all for joining us this year; it’s been a true pleasure and I can’t WAIT to see what 2013 holds for us all!