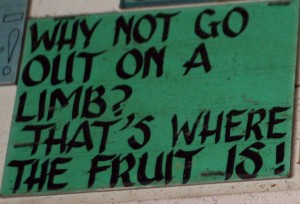 What is the biggest risk you’ve ever taken?  Being an Entrepreneur one of my qualities that I attribute to much of my success working online is being able to take risks and accept the consequences – good or bad.  When I take a risk I don’t like to look back, I take it and accept there is nothing I can do to change it.

There is one risk I didn’t take and I always wonder what would have happened…  The year was 2001 and I was becoming successful with my original companies.  Even during the “dot com crash” I wanted to drop out of high school and pursue my online ventures full time.  My goal wasn’t to make millions of dollars, it was to create something cool and useful.  There was very little competition and little (to no) information out there on how to learn the stuff I had already taught myself the hard way (trial and error).  I was 16 years old and my parents wouldn’t hear of it. “You need your education” was constantly pounded in my head.

Being reluctant I continued through high school and even went to college and earned a degree.  Looking back on things, I don’t consider those year’s wasted, because I still worked online, but I definitely spent a lot of time studying and doing BS assignments that I can’t even remember now.

At the time many of my “online buddies” either “dropped out” or had already graduated high school and decided to skip college.  When I graduated college in 2007 I felt like I was light years behind them in my career.  Once again it’s not about the money.  I look at the companies they’ve built and the things they’ve created and find it amazing. Some of their companies are now very well known brands throughout the industry.

In 2010 I was once again presented with a huge risk…  I was full time with my online companies and growing business at break-neck pace.  However I was dating a nice girl and I had a big decision to make.  Get married or “go big time.”

There is nothing wrong with getting married but for me I felt like it was going to be challenging.  Sure, I was growing with my companies but I knew that once I put a ring on her finger I would have to adjust my priorities to develop my family. Obviously business would grow except the pace would slow down. Not because I wouldn’t have tried but a newly wedded bride isn’t going to want her husband being gone all the time (even if they say they don’t mind).

Everyone has their own definition of “going big time” but for me it was getting out of the small state of West Virginia and developing my businesses internationally.  I’m not trying to bash WV, but wanting to focus on building a team of “techies” that all wanted to innovate, wasn’t going to happen there.   Knowing it would require me relocating and a hectic travel schedule, I had to make the tough decision of breaking up.  I didn’t want to end up like what happened in 2001 asking “what if” so I took the risk.

As the years have passed I’ve continued to take risks and accept the consequences.  In a fast past environment like the Internet there is no time for hesitation.  You can “what if” and “maybe” things to death, but nine chances out of ten your gut instinct is always right.

Regardless, one thing remains true.  The greatest risk is not taking one at all because you’ll never know.  Just like my story back in the early 2000s.  I didn’t take the risk and I’ll never know what would have happened.  I took the risk in 2010 and not only grew my businesses exponentially, I expanded my team and met some amazing people.

By no means am I saying that education is a complete waste and not to get married or have a relationship.  I have several industry friends that have made it work.  It’s just not for me right now.

What risks have you taken for your career?  Did you bet the house and worry about where to live later?  Or did you pass up on the risk to retain a sense of security?