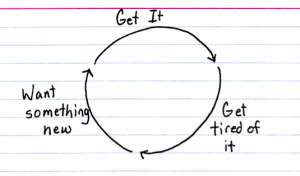 At times affiliate marketers can become overwhelmed.  By nature most are Entrepreneurs and are looking to sustain large revenues by promoting a product or service that they do not own and just get paid on commission.  This model works very efficiently because you don’t have to worry about shipping anything or dealing with customers.  Simply send the offer traffic and get paid when it converts; easy right? To some it is while others over think the process and become overwhelmed with “chasing the next offer” or “coming up with a better idea.”  I like to refer to this as shiny object syndrome.

Over the last five years I’ve worked, trained, and seen a lot of affiliate marketers come and go.  I’ve seen a lot become successful and I’ve seen a lot fail.  It’s really the nature of business, some can do it, others can’t.  One thing that I have noticed though the ones that think the simplest and just “do” succeed the most.  The ones that try to conspire or over think the process seem to have too many things going on and have one helluva a time ever finding consistent profits.

Fresh out of college in 2007 I messed around with day trading the S&P 500.  My mentor told me the best tip he could ever provide me was to “think like a monkey.”  He said if you over-think the process you’re never going to succeed day trading.  At the time that didn’t make a lot of sense to me; but now five years later it makes a ton of sense.  Don’t try to act like you know something that you don’t.  Follow the process and don’t come to your own conclusions.  A lot of Entrepreneurs like to think they know more than they do and end up failing by over complicating something very simple.

Affiliate Marketing is a lot like this.  The hot offers are hot for a reason.  They are the offers that you should be promoting because they work.  You shouldn’t conspire and think because everyone else is running them that they won’t do as well for you.  The opposite is true.  When a hot offer comes out your goal should be to go out and seek as much traffic for it as humanly possible and run the heck out of it for as long as you can.  This is where you’re going to start building a lot of capital and be able to diversify your business.

If your sending paid traffic as an affiliate you need to have a budget per campaign.  If you can’t afford this then you need to focus on free sources of traffic and build up capital before you begin.  Over the years my budget has increased from a couple hundred dollars a day per offer to now a couple of thousand.  When I know that an offer is hot and it’s working for others I know it’s just the matter of getting the right amount of traffic to it to make a lot of money.  That’s why I’ll go out and spend a couple thousand in one day to test multiple traffic sources, creatives, as well as monitor the time of day to see how the conversion rate is effected.  Obviously I wouldn’t be doing this is I didn’t have the budget.  The last thing you would want to do to your business is get into debt.

Once you have tested and find the “sweet spot” with the offer milk it for as long and as hard as you can.  If you wake-up one day to find your conversion rate lower don’t freak out.  Sometimes for unexplained reasons conversion rates will drop but if you pause traffic you’re not going to know what exactly happened.  I understand you need to set aside a “cut off” rather that be an amount of money or length of time; but don’t immediately pause your traffic.  Have a plan in place where you have set aside some of your profits if the offer starts to perform poorly.

Finally don’t be an “offer jumper” going from one offer to the other; from one traffic source to the next.  Find your hot offer then set aside a budget on a traffic source for it.  Since its likely you’re going to lose money in the beginning (while you eliminate non-performing creatives and placements) you should isolate the least amount of variables as possible so you can determine what’s going to work.  Spending twenty dollars on traffic source A with campaign A and twenty dollars on traffic source B with campaign B isn’t going to work.  Unless you have a team helping you; you’re going to be too spread out (if you’re a beginner) and won’t end up finding success.  Think simple and run the fire out of the hot offers while they’re hot.  Start building up some capital for your business and not debt.  Don’t think you know something when you don’t.