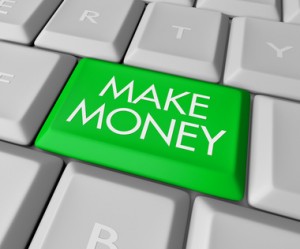 The next person that tells me it’s “easy to make money online” I’m going to slap them.  I got started making money online in 1998 and I’ve worked my ass off ever since.  Not a day has passed that I haven’t worried about “doing something wrong” or been nervous about the “outcome of a business decision.”  Unfortunately many people think just because work can be conducted on a computer in your own home that it’s easy to make millions of dollars pushing one or two buttons. If this was true we wouldn’t have poverty in the United States and we’d all be stuffing our pockets full of cash.

Starting a business online should be treated with MORE caution than an offline business.  Please understand right now that being self-employed at any level is an ASTRONOMICAL challenge.  It’s not easy.  When I first got started online I didn’t do it for the money (still don’t).  I started websites because I wanted people all across the world to be able to read my content that was generated in my home.  The money happened to be a bonus.  Over the last fifteen years I’ve seen a lot of stuff, good and bad, come from working online.

December 1998 I was a scrawny thirteen year old kid that was creative as shit.  I wasn’t the star athlete or an honor student I was your average kid searching for happiness.  When I started to work online I discovered a passion.  Something that I was VERY good at and could excel at.  Like most immature people I made my share of mistakes.  Once I became successful I developed an ego and eventually a persona that I was untouchable.  Unfortunately this a mistake.  Learning from my own mistakes, my “real” success came from the moment I decided to drop all my “beef” with my competitors and focus solely on growth and becoming a better businessman.

When I graduated college in 2007 I took my vision to the “next level” by leveraging my skills to generate revenues that would make some of the most prosperous companies jealous.  Over the course of a few years I quickly came back to reality when I realized that money doesn’t buy happiness but it also doesn’t buy brains.  Some of the wealthiest people I’ve met online are also some of the dumbest (no offense).

I cannot describe how much of an insult I feel when I turn on my television late at night watching all the bullshit infomercials promising instant riches.  These are BLATANT SCAMS with the owners ONLY making money from the dipshits that decide to shell out their credit cards for a $20 book only to enter in a conversion funnel that’s going to relentlessly call them in hopes of up-selling them re-hashed crap until their lifetime value reaches over several thousand dollars in value.  It’s a very sick and sociopathic business model.

Both of my grandfathers were very successful in business.  One is still alive and his businesses are thriving while the other has since passed but his legacy still continues.  BOTH of them had one common trait; they never gave up and failure was not an option.  The same lies true today.  Over the last twenty months my businesses have undergone tremendous changes but one thing remains consistent: I’m successful.  This evening I spoke with my grandfather that’s still living and described to him the success of one of my companies.  He reminded me, “remember what I told you boy – pigs get fat, hogs get slaughtered.”  I reassured him that I ALWAYS take that saying into consideration and have even purposely limited the growth of my companies so we do not get into trouble.  When money starts coming in, it’s VERY easy to neglect this simple saying and scale until your blue in the face.  The problem with this model is it’s not successful most of the time.  Something somewhere along the line gets overlooked.  Something gets messed up and it never works out as planned.

Many of you out there reading this have followed me over the years.  I started blogging in 2009 because I felt I needed to voice my opinion about the truth of making money online.  When Ruck and I started IMGrind in July of 2011 a number of people felt we “sold out” or start being “bullshit gurus.”  That couldn’t be FURTHER from the truth.  We wanted to start a LEGITIMATE coaching and mentoring program that actually helped people of ALL skill levels get started making money online.

This past January I backed away from my busy work load and started to read some of the success threads in our Private Community.  Some members that JUST got started working online were touting about making upwards of $700+ a day PROFIT online.  Words cannot describe how good this felt to me.  Ruck and I didn’t need to start IMGrind to make money – we made plenty on our own working as we always had.  We started it with a vision that we would help people of ALL levels that were struggling and their only resource was the bullshit on late night television.  Seeing the success only solidified my own vision; to help others avoid all the rip offs, scams, and bullshit to find sincere happiness and how to create a legitimate online business.

In CPA affiliate marketing we have all seen the online personas of the “ballers” that drive a fancy car or live in a 10,000+ square foot home.  It’s good to reward yourself from your accomplishments but if this is the dream you’re chasing I’m afraid to tell you it’s a very empty and lonely one.  I’ve had all this stuff and the most fulfilling things I’ve found is my TRUE friendships and relationships with my family.  Unfortunately my success over the years has developed a relentless form of hatred from some but others have continued to encourage me that drive me towards even more success.  When you make a lot of money it perceives the way people think about you.  I guess some is due to the fact how Hollywood perceives “rich people” but there is SO MUCH MORE to being rich, then holding that all mighty dollar; I promise you.

If you’re out there reading this and you’re currently making money online I challenge you.  Are you doing something because it’s your passion or are you doing it for the money?  If so, please ask yourself what is REALLY important in life.  If you’re out there reading and are interested in starting your own online business please don’t think it’s going to be easy.  You’re going to be faced with challenges and time limitations that you never even dreamed of. You’re going to have to make sacrifices that you never thought about to pursue your goal full time.

I can’t tell you how many nights I’ve lost sleep over not succeeding with one of my goals.  The reason why I’m here right now addressing you is I’ve never let these challenges defeat me I’ve stuck with my original plan and always executed accordingly.  The CPA/affiliate marketing space has “grown up” tremendously over the last two years with companies crashing that we never thought would.  Unfortunately every circumstance is different, but none-the-less it’s never “good” to see a company fail.  I not only thrive on success but the success of my competition.  Unlike many of the haters out there I like to see others do good because if they’re doing good I know there is more that I can accomplish in the industry.  Poor business decisions, bad money management, and “slaughtered growth” all play a big part in this unfortunate downfall. However, as I was once reminded, “the cream always rises to the top.”

If you get nothing else out of this blog post understand that making money online can be very rewarding because there are no boundaries.  Using the Internet you’re able to scale exponentially into multiple states, countries, and regions.  It’s not easy and you should treat it like a “real business.”  Don’t mistake the scalability for the “easy route” to life as that’s not true.  Those that continue to create and develop successful online businesses are there for a reason: they worked their ass off.  There is no substitute.