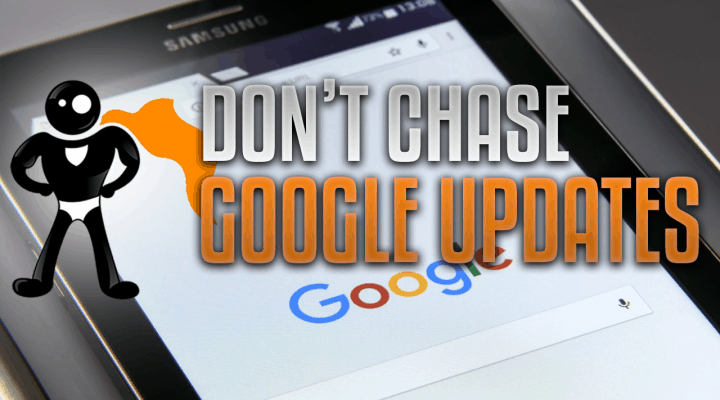 Late last month (October 2019), Google released “BERT” – a new algorithm update. BERT stands for Bidirectional Encoder Representations from Transformers, and is basically a complicated way of saying that Google now understands natural search queries better than before. It’s estimated to impact more than 10% of all search queries – a massive change that dwarfs its recent “MEDIC” update, and others.

But the important point here isn’t that Google changed its algorithm – it’s that you shouldn’t do anything about it! Here’s why.

My Jumps in Ranking

I have a very strict policy to not pay too much attention to Google’s algorithm updates – for two reasons. First, it’s not good for my blood pressure since they typically make changes every few weeks. And second, there is almost NEVER a way to figure out what changed, why it changed, and what should be done to fix it.

As a result, I just maintain my pages the best I can, without thinking too hard about the SEO specifics. Obviously, I do the basics – keyword research, google titles, sub headings, etc. But I don’t sweat the small stuff.

However, I was beginning to question my approach when some of my pages stubbornly refused to do well in the rankings for long periods of time, despite doing everything “right”. There were certain good pages, with a couple of nice backlinks, and excellent content, that were still buried deep down in the SERPS. I was beginning to wonder if I was going about it all wrong.

Then BERT hit. Here are the results:

In a few days, some of my pages came back from the dead, gaining as much as 46 ranking points to make an appearance on the first and second pages of the SERPS. One of them gained 30 positions to be placed on the first page of the results for my given keyword. By the way, in case you’re wondering which tool I’m using for this, it’s RankTrackr.

Why I Don’t Even Listen to Google Much

Like every good website owner/writer/SEO guy, I follow the Google search team on Twitter, as well as John Mueller from the Webmaster tools trends section. I sometimes find them to be extremely disingenuous when it comes to SERP advice, often saying things that we know are wrong.

For example, the Google search team brazenly makes the claim that we shouldn’t try and build links to our pages to rank well. That such techniques are a waste of time. Except that isn’t true is it? We know for a fact that incoming links have an effect on SERPS, and that sometimes, good content simply isn’t…well, good enough!

Now of course, there are risks to building links manually, and those risks are real. But Google saying that building links is a waste of time is just bullshit. An outright lie.

Separate the Noise from the Signal

None of this means I don’t know what’s happening in the search industry. Over the years, I’ve learned to build up a noise filter whereby I tend to spot BS pretty quickly. I’ve learned that certain SEOs hide their ignorance with data – more charts don’t necessarily mean anything.

Google’s algorithm is so complex, it might as well be a black box. And with the introduction of neural networks and AI, that box is about to become darker than ever. Trying to peer into it is a fool’s game. The right strategy is to keep creating good content, update your pages, make your site easier for users to navigate, focus on site speed, and other things that you know will work.

Then you just have to give it time, and ignore everything else.