As I type this post I’m sitting at the desk in the picture below – where it all started.  While I’m no Mark Zuckerberg, I had NO FREAKING CLUE the Internet would provide the life it has for me and my family.  I do what I do because I love it.  I have no motive, I just want to work online.  I’ve said many times the money has never been my motivator (because there is never enough) and to be honest it’s really something I dislike.  I hate being around people that try and brag about how much they make.  Over the years I’ve made plenty of money and I’ve been around some very successful people.  I don’t care if you drive a Honda or a Bentley, it doesn’t make ONE bit of a difference to me.  I personally would make sure that I’m diversified in-case a rain day were to occur (how many Playboy parties have we seen online only to be followed up by not paying bills). 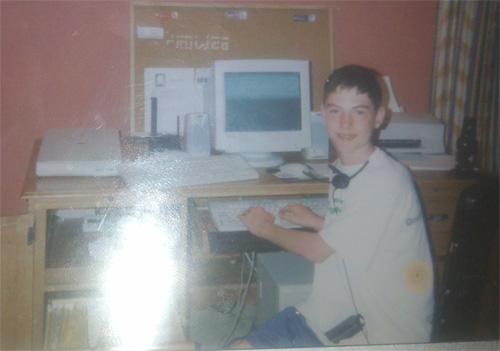 Since graduating college in 2007 I’ve been involved with SEVEN different online companies, which all have been successful.  The picture above was taken in the summer of 1999 when I was on break from school and was able to run my websites without interruption.  During those days, I made some very solid connections and have since watched many of my friends “make it big” and develop International companies that have accomplished some amazing things.    Today, people ask how I’ve been successful with all of my companies.  Many people in the past have tried to start similar ones and have failed (look at the number of affiliates that have tried to start a network and don’t last a month).

The reason I’m successful is I don’t give up.  Can’t stop, won’t stop.  I’m not in this for the money I do what I do because I love it.  For God’s sake, in the picture above, I could have been planted in-front of a television set playing a video game.  When I was 13 years old I had no worries in the world.  Fortunately, I had a stable family and didn’t have to stress about anything but making good grades.  I could have very easily not given two craps and been out with other neighborhood kids.  Instead, I liked to be on the Internet.  It has never been work to me, it’s been enjoyable.

My first successful website was in the pro wrestling niche.  I was able to sustain a reader-base close to 1,000,000 people a month and make a nice living from it.  Reflecting back on the last year of the inception of this website [IMGrind] we’ve went from reaching a couple hundred people a day to over 2,500 unique visitors consistently.  Why?  Because we don’t quit.  We post new content daily and keep an updated forum where we share some of our most successful tips we’ve used to sustain a living online.

To me, it seems like a lot of people want to make money online, or quit their “day job”, but lack the passion to do so.  If you’re just working for a couple of hours a night following a secular job, you’re not going to get anywhere.  You don’t have to be a rocket scientist to be successful online (trust me I’m far from one) but you have to have the drive to stay on late hours at night, get less sleep than normal, and do what it takes to break through the mold and become independent.  Working a 9-5 job brings a certain amount of security – I get it.  You know what you’re going to make every month and can budget accordingly.  But to become a bad ass and work for yourself you have to be able to take risks and execute the reward successfully.

If you’re thinking about quitting your job to work for yourself (offline or online) I want to challenge you today to break that mold, ignore everyone else, and actually become a success story.  Quit fucking dreaming about the life and take action.  Look at your progress for the last week…  How much money have you made?  If it’s negative then you obviously have some work to do.  Less talk, more action – can’t stop won’t stop.  Everyone likes the idea of working for themselves and escaping the cubical but very few people actually have the guts to do it.  I’m successful because I’ll make the sacrifice to sit on the computer at night while everyone else is out drinking/partying.

Ruck and I do something regularly that we get a huge kick out of.  We look online at the competition with their distractions (elaborate cars, vacations, homes, etc.) and zero in on running better companies.  We don’t spend the evening posting about how good we are, we spend it working our butts off making sure our readers, publishers, and clients have more money in their pockets.  Take a look at the picture below, it’s been over a decade, and I’m still sitting here working away. Can’t stop, won’t stop.  Competitors should fear me because I will not give up and I’m VERY persistent.  How many of you have quit your “day job” over the last year and transitioned to working online?! 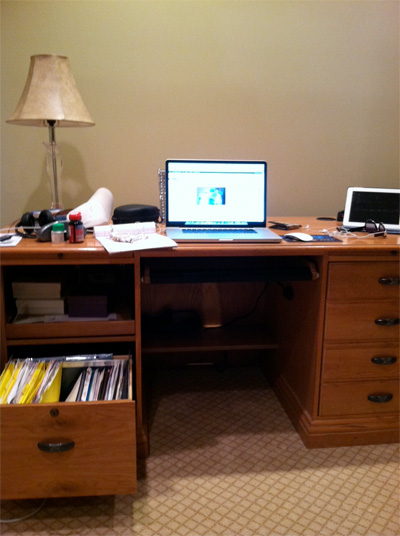