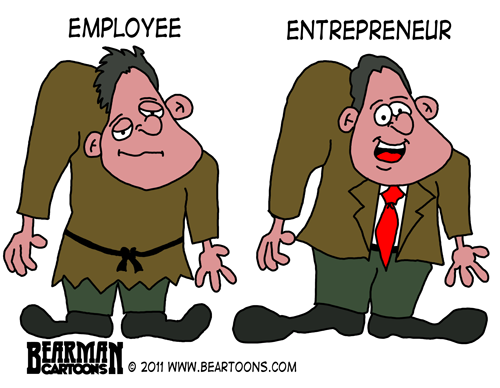 Everyone wants to be their own boss, set their own hours, and make a hefty income each month.  For those currently working a 9-5 job on a set schedule it sounds really appealing to dream about being on a beach watching the waves come in while sipping on an exotic drink and adding up dollars on their smartphone.  The dreams get even wilder when looking at Entrepreneurs and seeing them travel on a monthly basis and able to come and go as they please.  But how is it possible to “break through” the mold?  Those that are just getting started in their career may find themselves working long hours, paying back large student loans, and giving everything to their new job.  Those already in their career may find themselves already juggling between their 9-5 job, family, kids, and other aspects of life.  When is there time to learn how to break off on your own?

Since we started IMGrind.com two years ago I’ve had the opportunity to meet Entrepreneurs from all around the world.  It’s always interesting to me to ask them how they got involved in working online and when they made the decision to quit their day job.  Some people refer to me as “lucky” because I never did have to go out and have a “traditional 9-5.”  Since I got started in the late 90s I was still in junior high school and by the time I was in high school was making a “full time living” working online.  I went to college as an optional decision but spent the majority of my time taking night classes and working all day.  When I graduated in 2007 I was thrilled I no longer had any distractions and could focus 24/7/365 on my businesses.  Ruck’s story has always interested me because he’s been working full time since he was 16 years old but online for the last six years.  He probably gets annoyed with the amount of times I ask him, “when did you realize you were making enough money to leave your other jobs?”  “How intimidating was it?” “What did your family think?”

Ruck’s answer is much the same as other Entrepreneurs I’ve met.  “I worked my ass off Gray…  There was little time for sleep and as soon as I got home from my other job, I would spend some time with my family, and then boot up the computer where I would stay on almost right until I had to be back at my other job.”  To me, this shows a ton of dedication and passion.  As I said above, everyone wants to set their own hours and “fire” their boss but how many people want to boot up a computer at the end of a long work day and get to work while everyone else is sleeping?  This makes being an Entrepreneur not as appealing; it’s not in the dream.  Yesterday, I started crossfit.  For those of you not familiar, it’s basically a very intense workout focused on getting your body in amazing shape.  It’s not easy though.  It takes a shitload of dedication because as I’m typing this I’m a bit scared about how I’m going to be able to get around today.  But if I quit I’m never going to get back into shape.  That’s not me; I will go back today, work through this soreness, and continue to give it 110% until I achieve the results I desire.  The “coach” was talking to some of the new attendees yesterday and talked a lot about commitment.  Once you commit you have to stick with it.

On Sunday’s I see a common trend working with IMGrind, Revived Media, and iMobiTrax.  People I don’t hear from all week start hitting me up in the forum, on Skype, and via email asking some of the most basic questions.  They stay online for the most part of the day and as soon as I reply they’re back with more.  Some of them will even say “this is the day that I do this!  Today is the day that I quit sitting on the fence and take action.”  The results are almost always the same.  They have all this motivation, work hard for the entire day, but then Monday comes and it’s back to their traditional job and normal life.  The campaigns or websites they setup the day before are soon forgotten and their time spent online is nonexistent until the next Sunday. Friends, this is what I call “the Sunday Entrepreneur.”  Over the last two years I have yet to see one of these achieve a lot of success.  One or two may make some money but they never stick around for a long time because they’re only devoting [maybe] one day a week to becoming their own boss.

It’s fun being 28 years old, getting to travel a lot, and being able to set my own hours and come and go as I please.  There is one thing though that a lot of people can’t see on Facebook, Twitter, or other social media websites.  The majority of my time is spent behind a computer.  To achieve the results I have over the years has required a ton of dedication and commitment which would never had been possible had I not given 110% and never given up when I failed.  I still continue to fail with projects everyday but I learn from them and come out stronger.  Rather than going out with my friends on the weekends I’ve sat at home many of them while I finished up a large project.  While others take off holidays I’m working straight through them to get an advantage over my competition.  My weekends are also no different.  I may take some time off to go enjoy an hour or two at the lake or break off for a BBQ, etc. but being my “own boss” there isn’t a day I can’t go without doing some work.  It’s just not possible.

If you’re reading this and are wondering why you’re not yet successful with your own business take a quick moment to reflect back on the amount of time you spend working.  Have you committed?  Are you making sacrifices? Rather than watching that ballgame on Friday evening are you sitting on your computer giving it your all to succeed?  That’s what it takes and it can be especially challenging if you’re already working a 9-5 job daily, have a wife/husband, and kids.  The playing field is even.  Everyone only has 24 hours in a day but it’s how you manage those hours and the commitment you bring.  It’s tough to give up a couple hours of sleep or to miss the big game with your friends.  But much like crossfit the results are well worth the sacrifices made. Don’t be a Sunday Entrepreneur; your day would probably be best playing golf or going finishing if you’re only going to devote one day to try and “break through the mold.”  Give it your all and the results will amaze you!