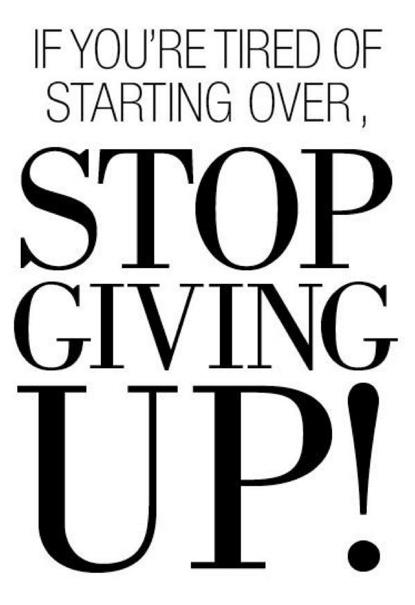 Being an affiliate can be an awesome way for you to start your online business and quickly gain large amounts of capital.  Most merchants pay on performance therefore you don’t have to stock an inventory, operate at certain hours of the day, or worry about the back-end support headache.  However one challenge many new affiliates face is giving up too early on a campaign.  For whatever reason they determine it’s not going to work for them and start over to the next best idea.  This approach gets old quick because not only is time being wasted money can start to diminish quickly.

Ruck and I have been working with affiliates for many years and one thing that gets frustrating is to see someone not stick to one thing and “bounce around.”  Around the office we refer to this as “shiny object syndrome” while others simply call it ADHD.  Maybe you’ve faced this before…  Have you ever got started on launching a campaign, spent several hours doing some research and setting everything up only to conclude before you start running that it’s not going to work?  Before the first click of traffic comes through you dump the idea and move on to something that you “think” is going to work better?  Maybe you haven’t but trust me I see it happen in affiliates of all kinds; beginners and veterans.

When you decide you’re going to get started on a campaign it’s very important to see it all the way through.  First, you need to decide on an offer that you know is working.  You can determine this by simply looking at what your competition is doing.  No, this doesn’t mean copy them, but if it’s working for others then chances are it will also work for you.  Think of how you can do it better.  This could be finding a cheaper source of traffic or an unique angle that’s going to yield a high ROI.  Another route you can take is ask your account manager at your favorite affiliate network.  At Revived Media we communicate daily with our partners letting them know exactly what is working.

Once you have the offer you’re going to run it’s time to find some traffic.  Obviously the big three: Google, Facebook, and MSN/Bing are going to have the most volume but they can also have the most competition and be challenging.  It’s up to you to do you research and find the source of traffic that’s going to perform the best. Regardless of desktop or mobile I first like to consider how much volume a potential source has.  If I’m going to be advertising internationally it’s important to get a breakdown of the daily impression volume for the source.  Especially if conducting a media buy nothing is more frustrating than getting started and not being able to achieve enough volume to test and optimize with. I also recommend sticking with one source first, preferably the one with the most volume, and then scaling out the others once you have the campaign optimized.

OK so armed with a hot offer and a traffic source it’s time to put things into action.  The next steps is you need to make sure you have some form of tracking in place and decide if you’re going to direct link, use a landing page, or test both.  All of this depends on the offer you’re about to run but regardless you need tracking software.  Your creatives (banners) used to run the campaign can respond very different depending on your audience so it’s important that you monitor the conversion rates as well as if the campaign works best direct linked or with a landing page.  Traditionally the more complex the conversion flow is the more you have to do to pre-sell the offer.  Most-of-the-time this is accomplished by using a landing page.

When you start running on a particular traffic source it’s important to declare a budget.  Unfortunately there is no “magic number” but you need to decide on an amount that you’re comfortable with.  The more items you test the larger the budget you have.  The higher the offer pays, the more you’re going to have to test with as one or two conversions can make a bigger difference in your ROI.  The biggest thing I want to stress is isolating as many variables as you can including the traffic source.  A very common beginner mistake is starting with more than one traffic source with a very limited budget.  You need to stick with one and then scale out as you make optimizations and become profitable.

Once your initial test starts it’s important not to “panic pause.”  If the source allows it, try and stretch your budget for an entire day. You may find that certain hours of the day convert better than others.  If you spend your entire budget in an hour or two you have a very weak idea of the traffic source’s quality.  If you run for an entire day and you’re slightly profitable/close to break even then it may make sense to run for an entire week to see if a certain day of the week converts better than others.

If you’re tanking right off the bat then you need to consider your promotion method.  Are you just direct linking?  Could there be potential in a landing page?  If so it maybe worth your time to test multiple landing pages to see if one angle works better than another.  Another thing you may want to look at is your traffic cost.  Is there room to get cheaper clicks?  Does the traffic source reward you for a high CTR (click through rate)?  If so then you need to be testing multiple ones trying to find one that’s going to yield a high eCPM.  Don’t ever make the mistake of starting with just one creative.  I recommend at least ten per campaign if not more.

Until all of these aspects are tested don’t count the campaign out.  I speak to a lot of affiliates on a daily basis and when they come to be telling me something isn’t working I follow up with much of this information.  Most-of-the-time they haven’t tested everything and are already considering defeat before exhausting every possible option.

Very rarely will I go into promoting a campaign and not find some way to get it to work.  If I know the offer is working it’s all about getting as creative as possible to figure out how to get it to yield solid results on a consistent basis.  Don’t set your standards too high.  Any profit should be your first goal, scaling comes with time and optimization.  Make sure to use your budget wisely and don’t spend money without gaining some type of knowledge.  That could be something as simple as important conversion data or landing pages/banner click through rates.

Your motivation will quickly leave you if you give up early and are constantly bouncing around from offer to offer “hoping” to find that one winner, starting over time and time again.  Pick a campaign and stick with it until every option possible has been eliminated.  Don’t accepted failure instead find out HOW you can make it work.