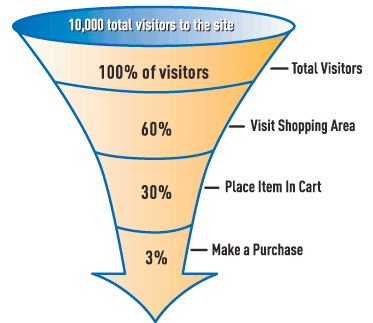 Regardless of the medium, every performance based campaign thrives on successful optimization.  Advertisers that start CPM (cost per one thousand impressions) campaigns make some optimizations but most are large brands with burn budgets that only want to be seen.  A click through rate edit here, another creative there, not much optimization really takes place when Best Buy is burning through a $30K budget at $5 CPM.  Performance marketers are more concerned on acquisition costs and generating a solid return on every dollar spent.  A lot start their campaigns on a CPC basis where they can benchmark exactly how much a visitor to their landing page/website is going to cost and then estimate their click through and conversion rate.  Three important optimizations include publisher, creative, and landing page.

The first optimization that can be made on most all traffic sources is the publisher or where the traffic is coming from.  On Google Adwords for example this could be an ad group that targets a group of keywords/placements on their display network.  The publisher would be the the sites that are showing your advertisements.  Once you start your campaigns you can begin to monitor the incoming clicks to see if they’re proceeding through your conversion funnel.  A lot of this goes down to user engagement.  Your goal when buying display is to interrupt the user with a creative and then get them to your landing page and through your funnel.  If they’re on a website playing a game they’re most likely going to have a higher level of engagement then if they’re on a website looking for driving directions or a phone number.  Think about that for a second.  If someone is playing a game they most likely have some free time.  So when they click on your ad and enter your funnel they’re going to have time to go through it and be engaged.  If they’re trying to find out how to get to a restaurant 0r order a pizza, then they’re going to have a much lower level of engagement.  They’re on the site for a few seconds, get what they need, and they’re off to accomplish their goal.

Many marketers want to test a budget of a couple hundred dollars and then blame the traffic source on poor quality traffic.  While this could be the case, before an accurate decision can be made, you must analyze where the traffic is coming from.  Is it all from one website or application?  Is it an above the fold placement or below the fold?  What is the engagement level on the site?  If it’s a blind network do you have the ability to turn off a certain placement?  All of these need to be evaluated before a source can be counted out.  Most sources allow you to optimize on a publisher level.  Rather this means pausing an exact site placement or a group of keywords, you should be tracking this because one bad apple could ruin the whole bunch.

When an affiliate comes to me with a campaign that’s not working and they’re only using one or two creatives I want to scream.  It’s damn near impossible to benchmark the performance of a campaign with only a couple of banners.  Regardless if you’re buying on Facebook or a large media buy, you’re not going to be able to make a confident decision only sending traffic to a couple of images.  As you’re optimizing on a site level you need to consider the engagement of your creative.  It’s possible your banner/text ad doesn’t relate well to your landing page.  You can analyze your bounce rate to see if this is the case.  Sometimes adding a headline from your landing page to your banners will increase your conversion rate and if paying on a CPC basis, increase your overall bottom line.

Most traffic sources accept multiple creative sizes.  From large banners to small text ads, you should start your campaign using all of them.  Going back to the publisher optimization and different creative size could also mean a different placement.  More than once I’ve seen this metric make or break a campaign.  A medium box unit (300×250) could have a better position on the site you’re purchasing on and increase user engagement while a smaller banner (468×60) at the bottom of the page could be buried under a bunch of content.  You should always consider multiple creatives including multiple sizes to discover where the ROI lies.

It’s easy to get in a hurry when buying traffic.  You’re excited to see the results and you’ve already spent several hours building out your landing page.  Rather than setting up a split test you just want to test a quick $100 and see what the results are.  After the budget is depleted your left scratching your head on why it didn’t work and get very frustrated.  That’s why before you even send the first penny of traffic to your campaign you need to be split testing against another unique page.  Benchmarking is a very important part of the optimization process.  If you have nothing to compare your page to, then you have no clue if it’s the page or the traffic source that’s not working.

Recently I was running a campaign on one source and noticed about 30% of my traffic was clicking through to my conversion funnel.  I moved the exact same campaign over to another source of traffic (with a couple of different landing pages) and noticed a drastic decrease down to 2%.  Since I was split testing against a couple different landing pages I was able to rule that out as a reason why the campaign wasn’t working.  The real reason was user engagement on the traffic source.  My traffic wasn’t engaged and when they landing on my pages they were quickly exiting because they didn’t want to proceed to my funnel.  They were busy doing something else and while my creatives did garner their attention and bring them to my page, they didn’t want to spend the time to go through my process.  Another approach would be to make a more aggressive landing page that has the goal of moving the traffic quickly to the funnel.

In conclusion before you start your next performance based campaign consider these three important optimizations.  First, take a look at how the traffic is coming to your landing page.  What is their engagement level?  Then consider the banners/creatives you’re using.  Do you have all the sizes the source accepts?  If not you need to go back to campaign planning as these can have a big effect on your placements.  Finally your landing pages always need to be split tested as benchmarking is a very important part of the entire process.  The traffic source shouldn’t be counted out if you can’t compare it to anything else.  By following these three important optimization tips you’ll find yourself becoming profitable a lot quicker and producing more consistent winning campaigns.